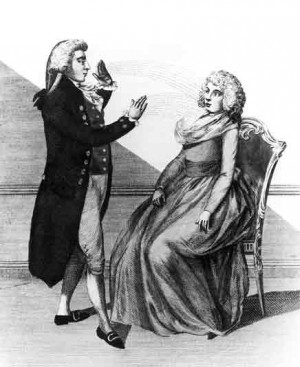 What is Mesmerism Energy Healing?

Mesmerism, or mesmerism energy healing, is generally associated with hypnosis although it is not the same as modern hypnosis or what is commonly referred to as hypnotherapy. It does have certain similarities to traditional hypnosis techniques, but is not hypnosis in the true sense of the word. It is similar in a way to Reiki and other forms of “energy healing” but is predominantly the domain of those trained in the field of hypnosis.

Mesmerism was originally developed by Franz Anton Mesmer in the late 1700’s (this is where the word ‘mesmerism comes from), Mesmerism is about the transfer of energy between the Mesmerist and client to instate a special trance state. In doing this it is possible for the Mesmerist to use energy as a means of healing or to reconcile issues within the client. Anton Mesmer referred to this as ‘Animal Magnetism’ and that it happened through the transference of ‘ethereal fluid’.

Today these same principles are applied to a multitude of other disciplines based on Mesmer’s methods including Energy Healing, Reiki and even Kinesiology.

Mesmerism uses little or no words to promote the trance state, uses passes (stroking the energy field) to bring change patterns in the client and has its roots in traditional hypnosis as practiced by the ancient cultures such as Egypt. There is very little “hands on” in Mesmerism as compared to Reiki, although Reiki can also be applied without physically touching the body.

I believe that in both Reiki and Mesmerism, its really not so much that the healer is sending to the subject, but rather that both parties involved merge together and share a space in unified way, where they resonate in tune with one another. I believe that it is this connection that heals.

Mesmerism can be used for ANY issue – physical, mental, emotional or spiritual. A Mesmerism Energy Healing “treatment” usually takes around 45 minutes and will cost you $75.